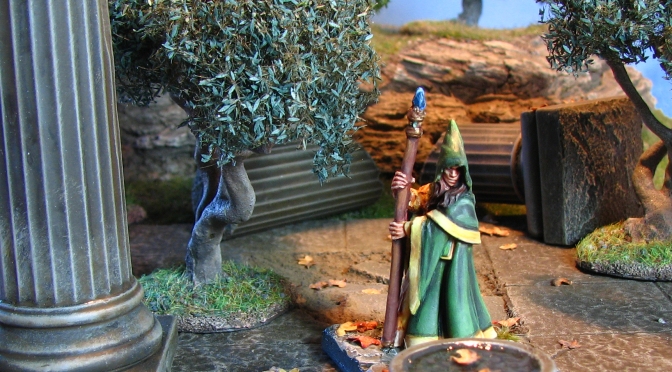 We focused on beer and dwarves last time, but today it is all about elves.

Anirion, a relatively young elf from the Silverforest up north, made it his life’s goal to not only become as powerful as his mentor Alduriel, but to surpass him. After he read all the elven texts he could lay his hands on he soon realised that simple study will not make him an equal to the most powerful wizards in the realm. One of the few wood elves to ever leave the Silverforest he ventured out to seek secrets of old and to only come back after he unravelled them all.

It was late on this autumn day when he found his destination: The ruins of Jor-Adin, said to have housed an extensive library with copies of the works of the five arch wizards of the long crumbled empire of man.  Calm lay the overgrown ruins before him, but no bird was signing, no deer passing through. He spoke a short prayer to Corellon and ventured deeper in the ruins, his senses sharpened, his goal clear…

Anirion Wood Elf Wizard, a sculpt by Bobby Jackson, is a beautifully sculpted miniature with the right amount of detail to make it fast to paint, but also look good on the table. While his flowing cloak disguises his sex, the facial features suggest that we have a male in front of us, so does the name of the miniature. His face is full of character and really gives him a mysterious appearance. It translated well into the Bones material. His cloak is mostly unadorned, but the gifted painter could add free hands on the borders of the cloak. The soft folds look realistic and offer the opportunity to practise blending.  His staff lacks a bit the fine detail one would expect looking at the face and it could be slightly thinner.

His pose is convincing and does look natural. He rests on his staff, slightly looking down, but one gets the impression that he is ready to cast a spell anytime. He is merely studying his opponent, waiting to unleash his powers. These subtleties make the model quite outstanding and I am really impressed that Jackson accomplished this.

He is well suited to depict a  RPG hero, as he has enough presence to stand on his own. In a skirmish game his stance might be a bit too static for some, but he could still be used by people who like a more subtle hint at the prowess of a miniature than glaring steel. For rank and file he might be suitable as part of an elven unit, may it be as a priest or battlecaster, making him an excellent addition to any Fantasy army.

The casting is overall excellent and even difficult areas like his face were translated very well in the Bones material. The mold lines can be removed easily with this model as they are following the cloak and are thus easily accessible with a sharp knife.

The Bones miniatures come pre-assembled and with Anirion I assume the staff and hands were cast separately and put together with the body before shipping. Due to this the transition between cloak and hands seems to be a bit rough on his right arm, but it is in any case covered by the staff. The other details are all relatively crisp and well-defined, only the adornments on top of the staff are in part very flat and it is hard to see what is ment to be a jewel or bronze fitting .

Anirion retails for 2.49 $ US. The cost-benefit ratio is working out and one gets a very nice miniature for a fair price. If you have a wood elves army or love to play them in your favourite RPG you could surely consider getting him.

Painting Anirion was pretty straight forward. His cloak offers plenty of surface to practise blending and given he is mostly cloak it doesn’t take long to finish him. One slight problem is that the miniature comes pre-assembled which makes it very hard to get to his robe at the front as it is covered by his hands and staff.

I used a mix of Reaper Master Series paints and Vallejo Model Colour and GW washes.

Cloak: Basecoat of RMS Grass Green and successive amounts of Vallejo Deep Yellow for the highlights.

Robe and cloak borders:  Basecoat of Vallejo deep Yellow, followed by a wash with GW Reikland Flesh and successive amounts of RMS Pure White for the highlights.

Metal fittings on staff: Brown Base Coat (RMS Muddy Brown) followed by Vallejo Bronze and a wash with GW Reikland Flesh. I then mixed some Vallejo Bright Bronze in it for the first and the second highlight finishing of with some Vallejo Silver.

Staff: RMS Muddy Brown with a bit of RMS Blood Red as base colour. Vallejo Deep Yellow mixed in for the highlights.

Hair: RMS Muddy Brown with a bit of RMS Blood Red as base colour, highlights with successive amount of RMS Tanned Leather and RMS Fair Skin.

Base: The base I sculpted myself using Sculpey. You can find a step-by-step tutorial here. The grass is MiniNatur Autumn Grass Tufts and the leaves are birch seeds coloured using different thinned down reds and yellows. 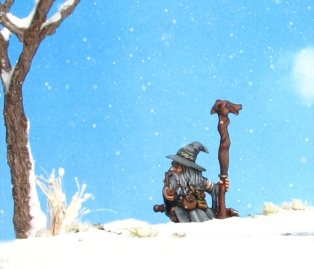