Our yew tree stands already proud, but yew trees are evergreens, so we cannot leave it barren, instead we have to find a good-looking solution to depict coniferous leaves.

In Part I of this tutorial we created the trunk, branches and scenic base of our ancient yew tree. In this second part we will conduct some experiments to find the best solution to depict the  leaves, use some simple weathering techniques to add depth to the foliage and finally fixate it with thinned down PVA or acrylic medium. The last step is to matte varnish the tree and then glorious battle around its trunk can ensue! We will also revisit the fallen branches and add some finishing touches to the bases.

A wave of his hand and a huffed word later a sphere surrounded him, the roar became faint and the green of the forest hazed.  It took him a few moments to regain his composure, but soon enough he saw Lykaion through the haze,  shadowy his movements, teeth bared and eyes of blue steel.

Where he stood just a moment ago a sizeable hewn rock had smashed branch and water bag alike, accompanied by a satisfied sneer. Soon enough the sneer turned into a disappointed grumble and  from the shadows of the nearby oaks a grotesque creature came forth, tall as three men, bulging with brawny muscle, and two heads sharing the same body.

“Me brother Gruuk say throw rock, but Gruuk dumb. Me say squish with club. Easy”, one of the heads said. “Gruuk no dumb. Brock dumb. No can throw rock”, responded the other.

With a  flicker of a smile on his face, Anirion spoke slow and loud: “Not Gruuk, nor Brock are stupid. Both are very clever indeed. They should first squish and then throw. Just to make sure.”

Gruuk and Brock looked at the elf, both apparently surprised by his ability to speak. “Ay, Brock no dumb. Little man can speak? Little men only scream or squish.” Gruuk nodded. “Yes, only squish, no talk.”

“But why squish them in the first place Gruuk and Brock?” he asked the towering shadow.

“How dare they? But I am not a man you see, I am an elf. We desire nothing the short-lived folk spends its time chasing. All I desire is knowledge my friends. A book, is all. I believe it is amongst your treasure. Would you be so kind and sell it to me? Gold for a dusty old book?”

The two heads exchanged puzzled looks. “Book? We use for fire when cold. You fool!” Brock said, followed by a sneer. “Ha, aye, you fool little elf-man”, Gruuk repeated. Both heads guffawed, slapping their broad belly. “You funny elf-man. We not squish Brock, hmm?”

“No, no squish today. More funny to give book for gold. Har, you fool elf-man!”

“Yes Gruuk and Brock, I am simple-minded, but let me complete our trade, before I realise what a fool I truly am.” With nimble fingers he produced a small sack filled with coin. “Here it is my friends. You allow me to look for my book?”

Anirion threw the sack towards them, a big paw snapping it greedily out of the air. While the two were counting the coin he made his way into the hollow trunk and was quite surprised by the exquisite assortment of items this creature collected. Granted, swords and armour was rusted, but a big chest filled with gold, gems and trinkets stood in odd contrast to the mossy bark around it. A small unicorn carved out of ivory caught his attention, but he quickly thought better of it and found a pile of books to the right of the chest. Some charred, the ones closest to the soil moldy and covered in moss they were in a truly sorry state. Yet the book he was after was in pristine condition, its spine slightly sticking out from the middle of the pile. Scribing a small rune in the air with his left the books on top moved up slightly, levitating just long enough for him to retrieve his prize. His hands moved carefully over the thick leather cover and the heavy clasps on its side. The face of a sleeping woman graced its front, embossed in bronze.

“Hey, elf-man you finish?”, the harsh voice of Brock reminded him of the creature’s presence. He stepped outside and met Lykaion’s eyes, flaring with anger. “Not today my friend”, he thought by himself. He held the book above his head and turned the pockets of his gown inside out. “You see my friends, no trickery. Just this book!” 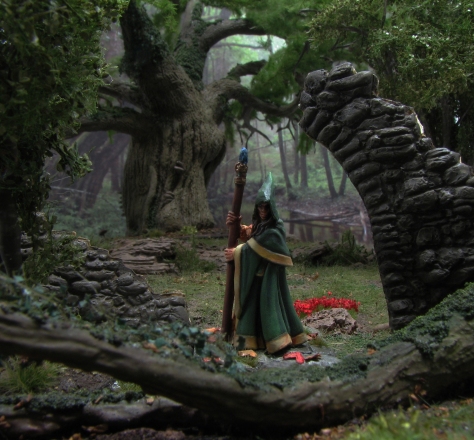 Gruuk and Brock smiled. “Ha, good trade. You go now before we squish and then throw rock.” “Certainly my friends”, Anirion replied, and removed himself from the old yew tree as quickly as possible. His feet moved lightsome avoiding branches and sink holes, the last he heard of the brothers was their bickering about who would get the bigger share.

Contented he wrapped the book in a clean silken cloth and put it in his satchel. Lykaion joined him soon after and licked his hand. “You saved my life today old friend, do you know that?” The wolf’s eyes looked at him knowingly, then he rushed away into the underbrush.

Anirion brushed a strain of auburn hair aside and smiled. It would be a good days journey to reach the small hamlet of Duskbridge, but at least he had some good reading for a rest.

If we look again at the overall appearance of yew foliage it looks not dissimilar to fir leaves, but naturally grows much more haphazardly. We thus need to achieve a loose texture with the needles growing all over the branches. That said, given all the work we put into texturing the bark and creating wildlife scenes I wanted to go for less dense foliage to really show off the details.

I tried three different approaches to achieve this effect:

I used one and a half medium-sized packs of MiniNatur foliage for the yew. The nets come as sheets, so you should cut them in triangles and then try to affix them forming a V, with the two legs pointing outwards. Using the nets in this manner we can simulate smaller branches that grow out of the thicker ones. 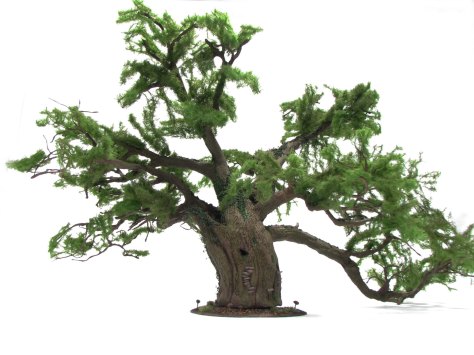 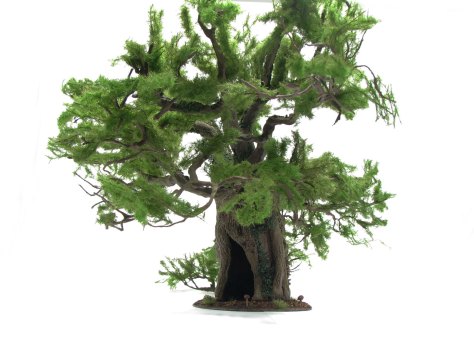 Using my airbrush I applied a very subtle brown filter to the nets. Just to add a bit of colour variation and depth. I also applied a coat of thinned down PVA to fixate the foliage. A final coat of matte varnish was then applied to the bark to tone down any glare and to give it a more natural appearance: 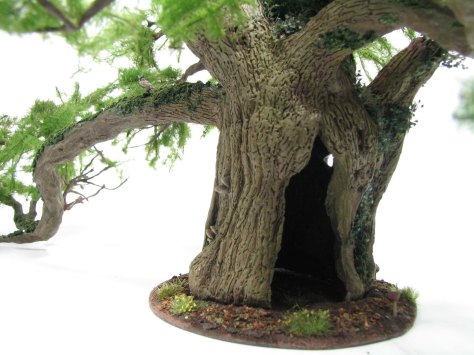 You will recall the fallen branches we worked on from part I. These got now a similar treatment to the yew’s base and now look the part:

This was actually more of a show-off combined with some experimentation. I hope you found it interesting and a fitting conclusion to the project. I enjoyed working on the yew tree and look forward to future incarnations. I want to make a 15mm version that could feature a denser crown and the feather technique will definitely end up in a future tutorial on fir trees (maybe even the snowy kind to fit a Frostgrave campaign).

If you have suggestions or questions please comment below. Until next time and always wield your brush with honor! 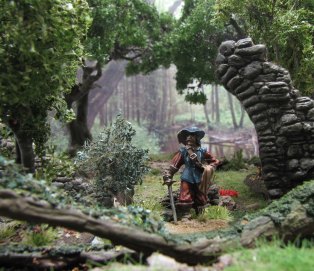 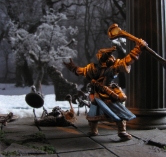 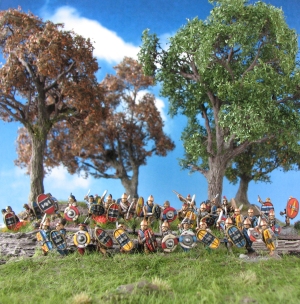